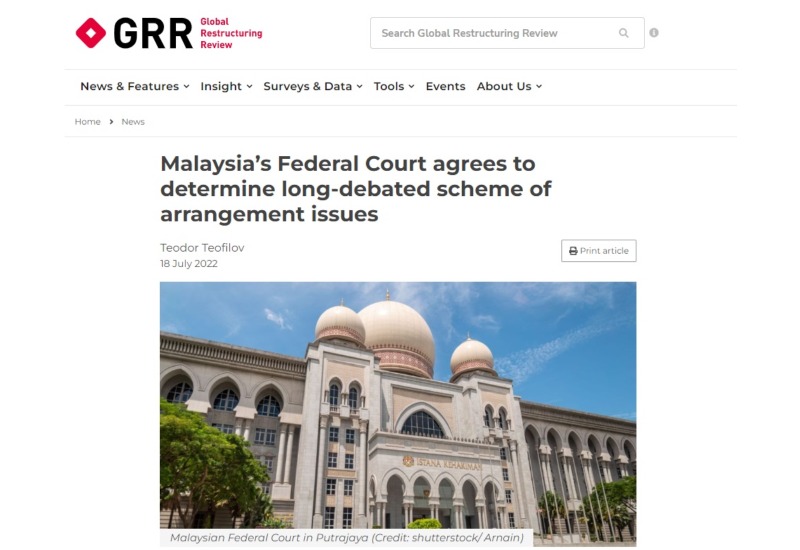 Leave to Appeal to the Federal Court on Scheme of Arrangement

20 July 2022 - Global Restructuring Review featured news on our team securing leave to appeal to the Federal Court on novel issues of scheme of arrangement law.

The appeal arises from the scheme of arrangement of MDSA Resources Sdn Bhd, the subsidiary of the Singapore-listed Hatten Land Ltd. The scheme creditors' meeting had voted in favour of the scheme but the High Court dismissed sanction of the scheme. On appeal, the Court of Appeal had also maintained the dismissal of the sanction.

One key area of argument will be on the votes of related-party creditors in a scheme of arrangement. Whether such votes are to be treated differently, discounted or disregarded altogether.

As an extract of the first four questions of law to be canvassed before the Federal Court:

"1. Whether the votes of related-party creditors are to be treated differently from the votes of other creditors in the same class in a scheme of arrangement.

2. If the answer to 1 is yes, whether the votes of related-party creditors in a scheme of arrangement should be discounted or not be counted altogether.

3. Whether the issue on proper classification of creditors should be determined at the Court leave stage (following the English Court of Appeal decision in Re Hawk Insurance Co Ltd [2001] 2 BCLC 480 and AirAsia X Bhd v BOC Aviation Ltd & Ors [2021] 10 MLJ 942) or only to be determined at the Court scheme sanction stage (following the Hong Kong Court of Final Appeal case of Re UDL Holdings Ltd [2002] 1 HKC 172).

4. Whether the Court at the scheme sanction stage should be slow to depart from its earlier determination on the proper classification of creditors unless there are material changes in circumstance (following the English High Court decision of Re Lehman Brothers International (Europe) (in administration) [2018] EWHC 1980 (Ch))."

Lee Shih, Nathalie Ker and Wong Li Qi are in the team acting for the appellant scheme company.